A professional scuba diver pulled off a "needle in a haystack" recovery when he used a metal detector to rescue a newlywed's engagement ring from the depths of Alabama's Coosa River.

Brooke Leavins had accidentally pitched the diamond ring into river days earlier while shooing a bug on her family's newly christened pontoon boat.

“I just cleaned it that morning and I thought, ‘Oh, I don’t want to get sunscreen all over it’ and put it in the cup holder,” Brooke told ABC News. “I had it in my fingertips and a bug landed on my arm and I went to flick the bug and I hit my fingertips on the Bimini rail and it just flew out into the water.”

“I heard it plop in the water, and I’ll never forget that sound,” she told WIAT.com.

Despite the shock of losing the ring, Brooke and her husband, Steven, alertly took photos of their exact location on the river. Those photos would come in handy a few days later.

The couple hired Spencer Phillips, a scuba instructor and co-owner of Southern Skin Divers Supply, to head up the recovery efforts. Phillips used the photos to position himself exactly where the ring entered the water. Hampered by swift currents and poor visibility, Phillips used a metal detector to assist in what he called "a tremendous needle-in-a-haystack situation." 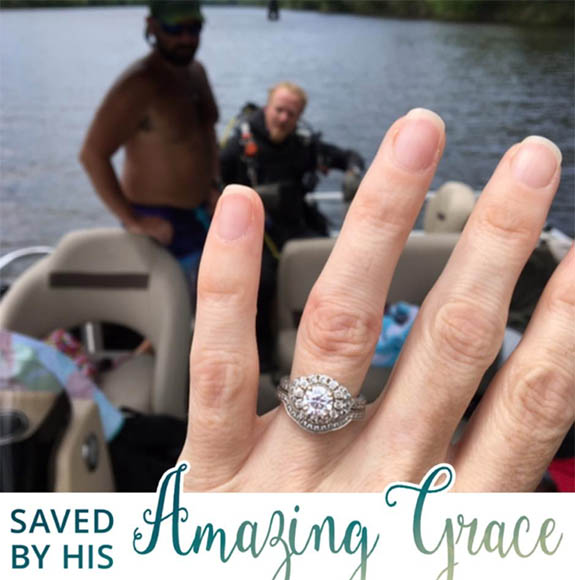 While navigating the river floor, Phillips found a discarded propeller to which he anchored himself.

“God put that propeller down there just for us,” Brooke told ABC News.

Phillips surfaced within 20 minutes. Acting a bit nonchalant, at first, the scuba instructor didn't let on that he had found the ring.

“I think he winked at my husband and then he came back around to the back of the boat to get back in," said Brooke. "He got up on the boat and he peeled back his glove and out comes the ring. Before he showed it to me, he said, ‘I don’t know if this is the right ring, but it’s a nice one.'"

Brooke cried at the sight of her cherished keepsake.

Steven told ABC News that finding the ring was a miracle.

“We had a lot of friends and family praying,” he said.

On Brooke's Facebook page, she posted a close-up shot of the recovered ring snuggled safely back on her finger. The headline read: Saved By His Amazing Grace."

"The rings are never going on the boat again,” said Brooke. “We both feel naked without our rings on so we’ll probably get some cheap boat rings to wear.”